The 2008 Auction
Ten out of the twelve LTBNL owners assembled at the Columbus headquarters of the Southpaws for the 2008 LTBNL Auction Draft: The 20th Draft in League History. It was known ahead of time that Dan's Fever would not be in attendance, due to an unavoidable work commitment in New York. Dan coped with this unfortunate result by turning in the most extravagant freeze list in League history: He froze the maximum 15 players for $270, leaving him $10 to pick up ten players after the rest of us had picked the Auction pool clean. What we didn't expect was that the Show Hoffs would fall victim to the flu, leaving them bedridden and only able to participate for a portion of the Auction. Dan did his best to impersonate a sailor on shore leave, blowing through most of his money in an hour and a half, in an early-Auction spending spree that included the biggest fish in this year's pool, Matt Holliday at $51. After also landing Mark Teixeira at $42, Willy Tavares at $29, and Ben Sheets at $20 (much to the chagrin of the DougOuts), the Hoffs called it a day.

The Draft got started a little earlier than usual, as all owners were punctual and eager to get going. Furniture was re-arranged to suit the auction format in a way that was guaranteed not to upset Southie's wife ... no, wait; strike that. With all rules questions for 2008 already settled, the League was ready to go as soon as the WiFi was up and running.

The Rick Shaws, by virtue of their last-place finish in 2007, threw out the first name at precisely 10:25. That name, interestingly, was Johnny Cueto, whom Peter Gammons had earlier picked as his choice for NL Rookie of the year, a kiss of death, to be certain. A few minutes later, the Quags were $15 lighter in the wallet and far too dazed to participate in the bidding for Cy Young candidate Johan Santana, who went next to the Udawgs for $47. A few picks later, another high dollar man, David Wright, went to the Rick Shaws for $50. When the first round ended, as the Wonders nabbed Carlos Beltran after back-to-back-to-back purchases by the ailing Show Hoffs, inflation stood at 33.7 percent, slightly higher than it had been at the outset of the Draft. Suggesting, I suppose, that no one overpaid too badly in the first round.

Karnold Nowledge, for the first time in League history, slinked into the Draft with a laptop. We supposed, at first, that he was simply another convert to Merv, forsaking "making his own decisions" in favor of "actually having a chance to win." But we were wrong. With his laptop, Arnie also brought a pair of speakers, and throughout the day, he treated us to a variety of entertaining baseball-related sound clips.

Others had laptops that seemed to be possessed by Stephen Hawking. Perhaps next year, someone should bookmark http://cepstral.com/ ... (For an idea of what that might be like, go to that page and type "You are making things very difficult for me" in the Demo box.)

Other highlights included the first ever conference call from a bathroom, as Southy continued to participate in the draft during his afternoon grumpy, Undy's reliever fiasco ["Undy, do you want to bid on Cla Meredith at $2?" "I already own Cla Meredith."], and the Peckers' comment, "I'm already at a funeral."

Thanks to the Southies for agreeing to host. The setup could not have been better ... except, perhaps, if the pool had been open. All in all, the 2008 Auction Draft was an unmitigated success. Thanks to everyone for your cooperation. 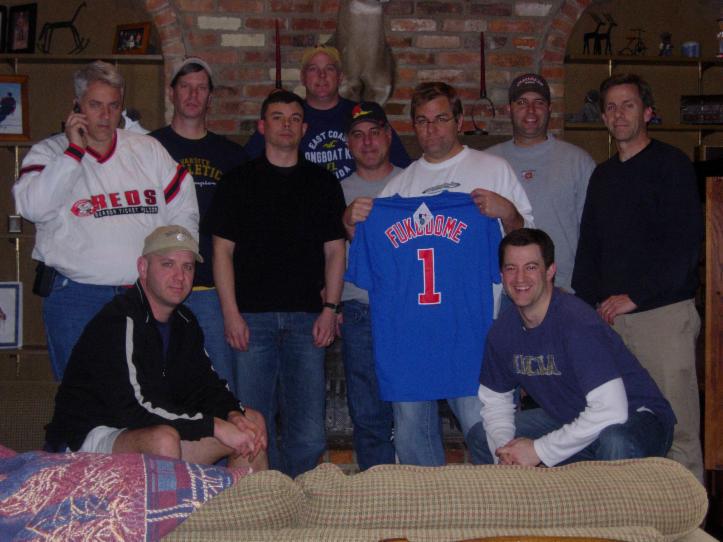