Someone had a crazy idea in 2005. Well, it was Ron Shandler's idea, but Doug May brought the proposal to the LTBNL. It was called "Roto7" and it was an entirely different scoring format than we'd ever used before. The idea was that each team would be assigned a number of fictitious wins and losses based on its performance in a given week. So every week was a fresh start! We used the last three weeks of the NL regular season for head-to-head playoffs, another first for the LTBNL. 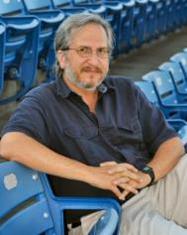 Apparently, we were ready for a change. When it came time to vote, Roto7 passed handily. It was adopted, at first, on a one-year trial basis. I think it's fair to say that reviews were mixed. A lot of people enjoyed the "fresh start" aspect but didn't like how unrealistic the win and loss totals of the top and bottom teams seemed. There were several prominent instances of "Operation Shutdown," when a team with a comfortable lead toward the end of the week in ERA or Ratio might decide to bench his good starting pitchers, so as not to screw things up. Almost everyone agreed that the playoffs were an exciting wrinkle. As could be expected, though, some teams suffered by not having their best players available in the last week of the season, as they were being rested by their NL teams.

Here is a recap of 2005, as written in the bittersweet days just after the season ended:

In the end, it came down to the last pitch of the National League Season. With two out, two on, and the Wonders' Trevor Hoffman on the mound, the first-ever LTBNL Championship Series between the Doug Outs and Stevie's Wonders hung in the balance.

The Wonders led Batting Average and RBI comfortably. The Doug Outs had wrapped up Saves, and very likely, Steals. Homers were tied at 6 apiece, and the Outs led Wins, 2-1.
Hoffman had already surrendered a hit and a walk in the inning, further reducing the Wonders' miniscule lead in Ratio. Even a run-scoring single would tip the ERA balance, and the series lead, in favor of the Doug Outs (meaning the only way the Wonders could win the Championship would be with a Hoffman win following his own blown save).

On a 1-1 pitch, Jayson Werth lined a rope to left center. Padres' rookie left fielder Paul McAnulty ranged far to his left, and made a nice running catch in the gap. The Doug Outs' Impossible Dream season died in McAnulty's glove.

When play began on Sunday, the Doug Outs led, 5.5 to 2.5. The Outs led the HR category, but by only two, a gap the Wonders would eventually close on Sunday HRs by Clint Barmes, Felipe Lopez, and most importantly, late on the West Coast, a huge HR by Moises Alou. The D'Outs held a tenuous lead in ERA and Ratio, and wins were tied at 1. The Outs had the red-hot Jon Lieber taking the hill, along with Matt Morris, while the Wonders had only one starter, albeit the NL wins leader, Dontrelle Willis.

Interestingly, both the Wonders and Doug Outs were away from their Columbus headquarters on Sunday. While the Wonders had sporadic access to the day's action via a laptop, the Doug Outs apparently were reduced to making ever-more-desperate phone calls to other LTBNL owners in attempting to keep up with on-field developments. Much of their day was spent in planes and automobiles.

The D-Train got off to a rough start, surrendering three early runs to the Braves, while Lieber cruised against the dead-in-the-water Nats. Advantage, Doug Outs. But in the third inning in St. Louis, the woeful Reds chased Matt Morris with back-to-back-to-back homers (including the aforementioned shot by the Wonders' Lopez).

Almost simultaneously, and most ominously for the incommunicado Doug Outs, a rookie reliever by the name of Blaine Boyer took the mound for the Braves in the bottom of the seventh, with a two-run lead. Boyer, acquired by the Outs as a $1 reserve free agent on August 18, had been useful in a limited role, with 3 wins, a 3.00 ERA and a 1.17 ratio. But on this day, he quickly surrendered a single to Dontrelle (one of the best hitting pitchers in baseball), then a double, a walk, and another single, and was sent to the showers. The damage done: 0 IP, 3 H, 3ER, 1 BB ... and a crushing blow to the Doug Outs' title hopes. The ERA and Ratio leads had been handed to the Wonders, along with a 4.5 to 3.5 category lead that the Wonders would not relinquish.

Boyer had been one of the more effective relievers in a beleaguered Braves' pen, and had undergone an MRI on September 27 that revealed, according to ESPN.com, an inflamed but otherwise undamaged right shoulder. After a cortisone shot on Wednesday, the Braves had cleared Boyer to "throw on the side" on Sunday. Inexplicably, he pitched in Sunday's game. Said the Doug Outs, "Somewhere between 'on the side' and 'on the actual pitching mound,' my season was lost."

It was an exciting playoff series to say the least. The scrappy Doug Outs fought valiantly to the end, and Stevie's Wonders, with six September Expansion hitters and the LTBNL's best pitching staff, proved worthy of their No. 1 seed. The Wonders grabbed first place in the LTBNL by the throat on May 1 and never relinquished their lead.

Here at the League Office, we spent Sunday afternoon glad to have a 20.1-inch computer monitor, completely ignoring such distractions as "wives" and "children," with the Bengals-Texans game in one window, the Wonders and D'Outs "Live Stats" in two others, ESPN Game-Tracker in a couple more, and an Excel spreadsheet to monitor the standings, half-inning by half-inning. Whatever you might think of Roto7, it was certainly a great series and a compelling final day.

The first-ever LTBNL Championship Series was won, 4.5 categories to 3.5, by Stevie's Wonders, who dominated the regular season with 117 wins, and the upstart Doug Outs, who finished 6th during the regular season.

In Round One of the playoffs, the Sol Train defeated The Rick Shaws, 5 categories to 3. The Doug Outs handled the Underdawgs, 4 categories to 2.

Round Two featured a heated, intra-family blood bath between the Doug Outs and the Gregory Peckers, who finished second in the regular season with 112 wins. In fact, at the end of the regular season on September 11, the Peckers led the "old way" standings, perhaps setting the stage for the inevitable call for an asterisk. But the Doug Outs, behind Matt Holliday (.333/3/13/2 for the week), got off to a hot start in the series with one of the most ridiculous Tuesday nights in the history of Rotisserie, including five homers and 22 RBI. They coasted the rest of the way to a decisive 6-2 victory, squelching the Peckers' hopes of picking up their first LTBNL title.

Meanwhile, Stevie's Wonders lay in wait for the Sol Train. The Train got off to a solid start and led 5-3 through Friday. But the Wonder juggernaut cranked out solid numbers throughout the weekend, regaining leads in ERA, Ratio, and RBI. A 3-run HR by Ramon Hernandez on Saturday night virtually salted away the RBI category. In the end, the Train were reduced to hoping for miracle pitching performances on Sunday from Jerome Williams and Jorge Sosa. It was not to be, as Williams walked six batters and gave up 2 ER through 7 innings, handing the ERA and Ratio crowns to the Wonders, who threw the fewest innings of the series and respectfully declined to start Eric Milton, Cory Lidle, and Brian Lawrence over the weekend.

The Gregory Peckers, title-less after 17 years, have requested that the LTBNL acknowledge that, had the LTBNL been scoring this season's results under the "Old Way" rules, the Peckers might have won their first Championship. We say "might" because, let's face it, the rules WERE different this year, and nearly every team played the season differently than they otherwise would have, had the "Old Way" rules been in effect. And hey, to be honest, playoff teams were trying to win weekly matchups, not accumulate season-long stats, and the teams who missed the playoffs understandably had no incentive to make any moves the final three weeks, and they didn't. So the value of the "Asterisk" title is dubious, at best, at least to everyone but the Peckers. But in the interests of making sure everyone knows who might have finished first, had we not voted to change the rules, as the Peckers strongly urged we do, and had everyone nevertheless played out the season as if we hadn't ...then, Greg, you win. Here is your trophy.