The season was late getting started due to the players' strike and the owners' threat to go forward with the season using "replacement players." A federal judge, who would later be appointed to the Supreme Court, issued an injunction against the owners, prohibiting them from instituting new rules in the absence of a collective bargaining agreement. That essentially ended the strike and the specter of replacement players. The season was shortened to 144 games and got started at the end of April. We held our Auction at the headquarters of Gregory Peckers on May 6, 1995, nine days into the NL season. It was the first season for the Southpaws, who took over the Patrick Division franchise. Neither of the two Wrecking Crew owners were able to attend, so they sent a surrogate, a person heard from neither before nor since. He was apparently led to believe that the Auction would take "about an hour or two," and wound up drafting as quickly as possible, so that he could get home and mulch his yard.

The Quags won their third title, riding the Coors Field trio of Galarraga, Bichette and Castilla. The Nowledge rallied to a second-place finish after being mired in 11th place at the All Star Break. The Fever had Greg Maddux, who had one of the best seasons ever for a pitcher (19-2, 1.63, 0.810), earning $61, and finished just a point behind the Nowledge (we calculated that Maddux single-handedly was worth seven places in the standings over an average NL starting pitcher). Fourth place was decided by the loathed second tie-breaker. On the last day of the season, the Quags' Howard Johnson stole a base, his first and only SB of the year. That steal cost the Doug Outs a point in the SB category, dropping them into a tie for fourth with the Peckers.

1995 was also the year that the Internet really started to have an impact on Rotisserie. It was the first season LTBNL owners could check out how their players did that day before going to bed. In the (ludicrously detailed) 1996 Winter Newsletter, we wrote about a site called instantsports.com, that actually provided partial box scores, updated batter by batter! 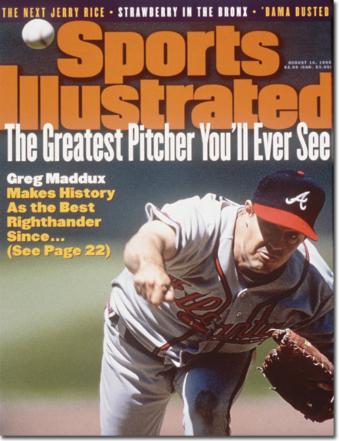