In the Consolation Series, Stevie's Wonders defeated Gregory Peckers, 6.5 to 3.5. In the Championship Series, the QuagMyers defeated the Doug Outs, 5 categories to 5, with the Quags prevailing in the first tiebreaker, Wins in the playoff series, 3 to 1.

Anticipating the demise of Total Quality Stats, we entrusted our stats keeping to CBS Sportsline. There were things we liked about, and things we didn't. There was a little bit of a learning curve for the PIFCL, so we had some stats snafus early on. CBS also promised that it would provide an awesome bobble head trophy for our champion. It never arrived. When the PIFCL called CBS to complain, they insisted that we'd "registered too late." This happened two years in a row, and I can assure you, we did not register late either year. CBS sucked.
. 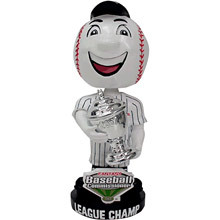